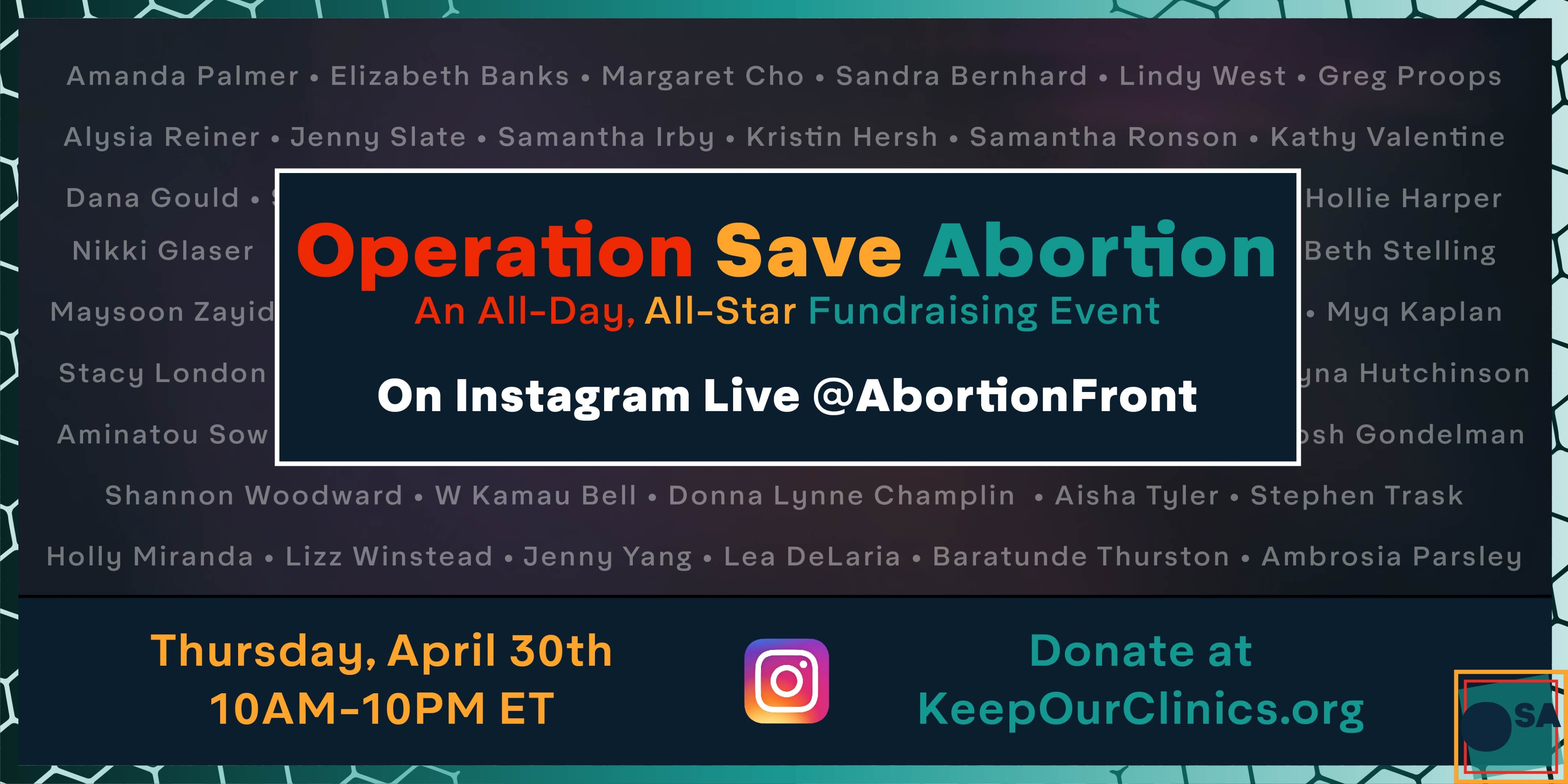 Next week, pro-abortion groups and Hollywood celebrities will unite for an all-day fundraising event dubbed “Operation Save Abortion” to benefit struggling independent abortion facilities across the country.

The fundraiser will be hosted by Shout Your Abortion co-founder Amelia Bonow and Lizz Winstead, The Daily Show co-creator and founder of the Abortion Access Front or AbortionAF – formerly known as Lady Parts Justice, but that was too transphobic.

The event will take place live on AAF’s Instagram on Thursday, April 30, for 12 hours starting at 10am eastern and will feature “performances, interviews and an auction including handmade crafts and experiences.” (Handmade crafts!) Among those slated to participate include rabidly pro-abortion B-C list celebrities, comedians, and other unknowns like Elizabeth Banks, W. Kamau Bell, Nikki Glaser, Jenny Slate, Sandra Bernhard and Margaret Cho.

“This is important now because anti-abortion politicians are using COVID as a way to halt abortion access. This country has already profoundly stripped away access to abortion care,” Winstead got on her soapbox and told The Hollywood Reporter.

“To think that they would use a pandemic as an excuse to cut off health care to people in a time where so many people are food, housing and job insecure because they see an opening to achieve their political goals is unconscionable,” she said, echoing pro-abortion groups that have called abortion even more essential in a pandemic. As if one tragedy wasn’t enough, pro-aborts want to add even more dead bodies to the Covid-19 count.

Winstead attributed her own success to having abortions, thanked God for abortionists, called abortion life-saving, and vowed to support women who want abortions: “As someone who has had abortions, I know that they allowed me to create a life for myself that allowed me to survive and thrive. Thank God for those who provide this care; it saves lives, and I will not sit back and let those who provide abortions and those who need them be alone in this fight. They need all our support.”

According to the Abortion Care Network, 3/5 of abortions take place at independent abortion clinics and 92% of their clinic members “indicated a need for financial support to continue providing care during the pandemic.” They share the good news that “during this pandemic, the average independent clinic will need $50,000 per month or else their doors may close permanently.”

Let’s hope people continue focusing on preserving life and abortion is not “saved.”