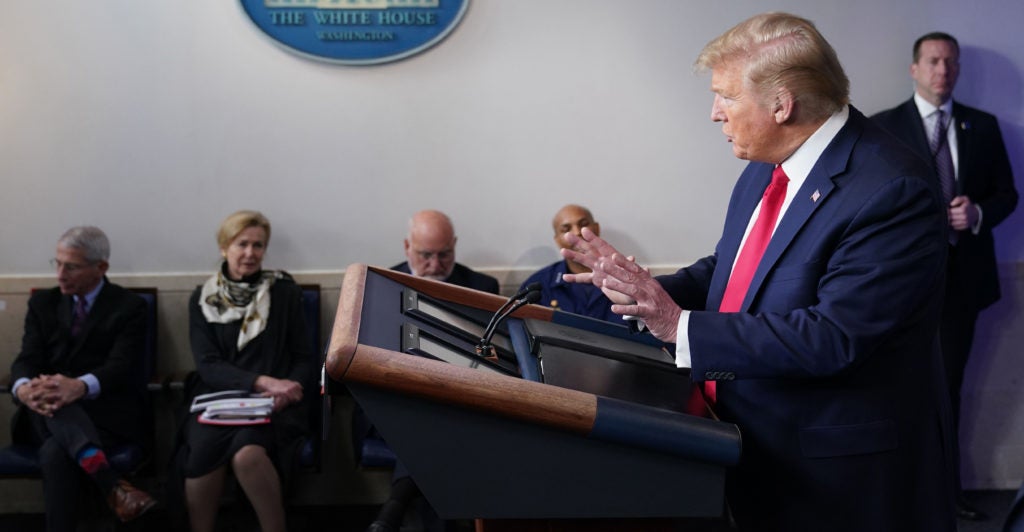 President Donald Trump said he strongly disagrees with Georgia Gov. Brian Kemp’s move to begin reopening that state, to include some of the most likely areas where the coronavirus could spread—such as gyms, bowling alleys, and hair and nail salons, as well as massage and tattoo parlors.

“I told the governor of Georgia, Brian Kemp, that I disagree strongly with his decision to open certain facilities, which are in violation of the phase one guidelines for the incredible people of Georgia,” Trump said at the daily White House briefing Wednesday evening.

Most businesses will be allowed to reopen Friday in the Peach State, but will still have to follow some strict COVID-19 social distancing requirements. That nevertheless runs afoul of the more deliberate reopening guidelines the White House had put forward in its three-phase plan last week.

“At the same time, he must do what he thinks is right,” Trump said of Kemp, a fellow Republican, adding:

I want him to do what he thinks is right. But I disagree with him on what he’s doing. … I think, spas and beauty salons and tattoo parlors and barber shops in phase one? We’re going to have phase two very soon. It’s just too soon.

And I love the people that use all of those things, the spa, the beauty parlors and barber shops, tattoo parlors. But they can wait a little bit longer. Just a little bit. Not much, because safety has to predominate.

According to the latest figures Wednesday from the Georgia Department of Public Health, the state has had 21,102 confirmed cases of COVID-19 and 846 deaths.

Meanwhile, Trump and the administration sought to reassure Americans that the federal government is prepared to clamp down on a potential second wave of the coronavirus in the fall and winter, even if it comes at the same time as the seasonal flu.

“There is a good chance COVID will not come back. If COVID comes back, it’s in a very small, confined area that we put out,” the president said.

The coronavirus will likely be around in the fall, said Dr. Anthony Fauci, director of the National Institute for Allergy and Infectious Diseases.

“We will have coronavirus in the fall. I am convinced of that,” said Fauci, a member of the White House coronavirus task force. “In the fall, we will be much, much better prepared.”

Fauci later elaborated: “Whether or not it’s going to be big or small will depend on our response.”

The Spanish flu of 1918 was known for having a second wave more severe than the first.

Dr. Deborah Birx, response coordinator for the task force, said that if the disease returns, “we will be able to find it earlier this time.”

“When we first interacted with this virus for the first time, in the February and March time frame, we didn’t have an understanding of its transmissibility or all of its symptoms,” Birx said.

“We do now, and I think what we are building together, when we talk about the public health infrastructure, it is very much working on the surveillance piece,” she continued. “But I think we also know the strength of the American people and their ability to understand how to protect themselves.”

The emphasis on the risk of a resurgence came after much of the mainstream media narrative for Wednesday was spent warning about the potential for a devastating second wave, based on a Washington Post story with the headline “CDC director warns second wave of coronavirus is likely to be even more devastating,”

Dr. Robert Redfield, director of the Centers for Disease Control and Prevention, told reporters at the White House briefing Wednesday that he was quoted accurately, but that the Post headline was “inappropriate.”

The Post quoted Redfield as saying: “There’s a possibility that the assault of the virus on our nation next winter will actually be even more difficult than the one we just went through. And when I’ve said this to others, they kind of put their head back. They don’t understand what I mean. We’re going to have the flu epidemic and the coronavirus epidemic at the same time.”

Redfield, asked by Trump to address the quoted remarks at the beginning of the briefing, said:

The key to my comments, and the reason that I really wanted to stress them, was to appeal to the American public to embrace the flu vaccine with confidence … and thereby minimize the impact of flu to be the co-respiratory disease that we confront.