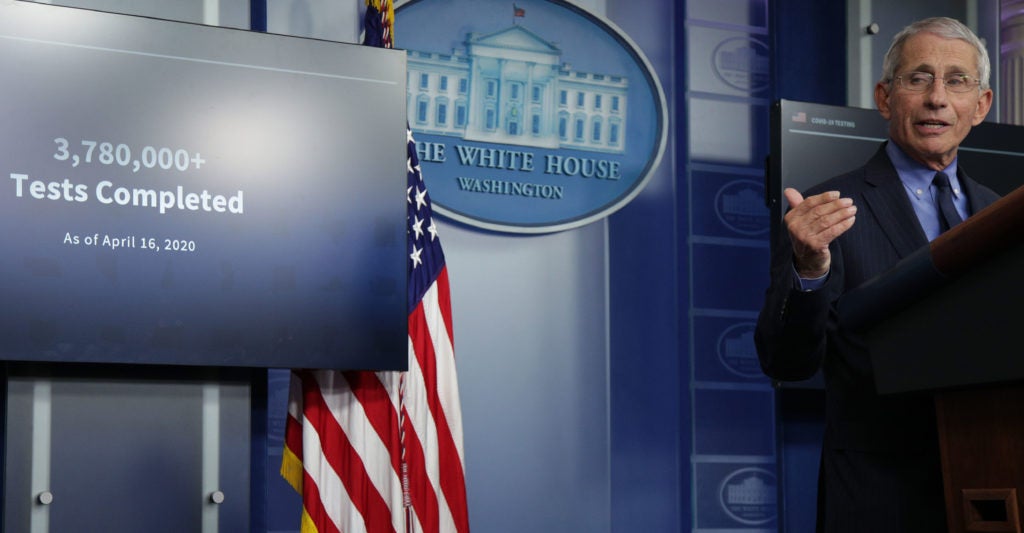 President Donald Trump and administration officials indicated that testing for the coronavirus is headed for a big increase, as the administration moves toward reopening the economy.

“Earlier this week the [Food and Drug Administration] authorized two new antibody tests, which is very exciting, that will determine whether someone has been previously infected with the virus, bringing the total to four authorized antibody tests already,” Trump said Friday during a press briefing.

“This will help us assess the number of cases that have been asymptomatic or mildly symptomatic and support our efforts to get Americans back to work by showing us who might have developed wonderful, beautiful immunity,” the president added.

Vice President Mike Pence said the “states could actually more than double the amount of daily testing that is happening today by simply activating all of the labs.”

“The FDA is currently working on an antibody test that could literally add 20 million new tests to our supply even before the end of April,” Pence said.

“Our best scientists and health experts assess that states today have enough tests to implement the criteria of phase one if they choose to do so,” Pence said. “States that meet the criteria for going into phase one and then are preparing the testing that is contemplated into going into phase one, our best scientists and health experts assess that today, we have a sufficient amount of testing to meet the requirements of phase one reopening if state governors should choose to do that.”

There are two types of tests for coronavirus tests, explained Dr. Anthony Fauci, director of the National Institute for Allergy and Infectious Diseases, who said he tested negative earlier that day.

One of them is to actually test for the infection. … The other is to test, as we just mentioned, if someone has been infected. Usually someone has been infected who has recovered that you can assume–although we need to do some more work on that–that that person is actually protected against subsequent exposure and infection with an identical organism. … The pluses and minuses are going to impact how we best use the tests and how the tests actually should be used.

Dr. Deborah Birx showed a map of the United States, demonstrating which states had the largest testing capacity. Larger states such as Texas and New York have capacity to do 1 million tests per month, she said.

We are working with each of those states on unlocking that full potential. How are we doing that? We’re calling on the American Society of Microbiologists. They work closely with 300 lab directors around the country and the Walter Reed team who developed the entire HIV testing for the military program 35 years ago. I’ve called them back into service and they are calling lab by lab to find out what are the technical difficulties to bring up all of the platforms that exist in your lab.

Trump also announced that the Agriculture Department will be implementing a $19 billion relief program “for our great farmers and ranchers as they cope with the fallout of the global pandemic.”

Agriculture Secretary Sonny Perdue said at the press briefing, “Having to dump milk or plow under vegetables ready to market is not only financially distressing, but it’s heartbreaking as well to those who produce them.”

AOC says that the predominance of men in Congress explains ‘why our politics are so gross towards women & LGBT+ people overall’
NEW NewsBusters Podcast: Abortion Overruled, Media Hardest Hit
‘You sons of b***hes’: Jordan Peterson refuses to bend the knee to ‘toxic’ Twitter, says he’d ‘rather die’ than delete tweet about transgender actor Elliot Page
Psst…Americans Actually Agree With the Principles of the Dobbs Decision
George Washington University shoots down demands from students to drop Clarence Thomas over Dobbs opinion