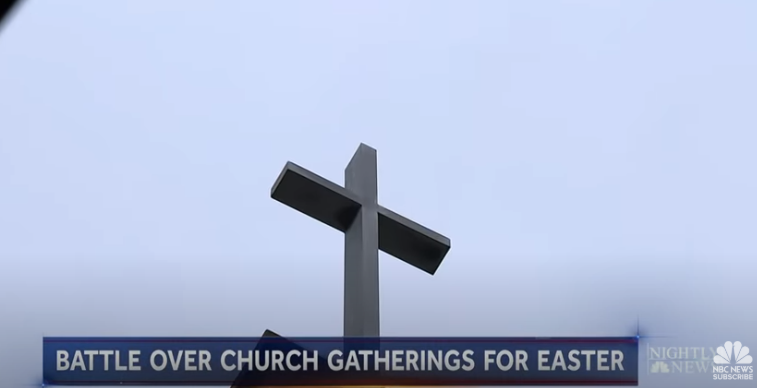 Millions of God-fearing Americans weren’t allowed to go to church Easter Sunday for the first time in their lives, but two out of the three major TV news networks spent only 20 seconds on the enormous controversy. Pastors, priests and members of Christian congregations celebrating their constitutional right to be in their churches were barely mentioned.

Combined, the NBC Nightly News and CBS Weekend News programs on April 12, Easter Sunday, gave only 20 seconds to cover Christian churches that have been asserting their 1st Amendment rights to hold services. Those services were set for the holiest day in Christianity, despite state government mandates. NBC’s broadcast gave just 7 seconds of airtime to these congregations, calling them defiant and CBS gave a tiny 13 seconds of coverage to these Christians it said were “ignoring” social distancing protocols.

ABC did a much better job on the other hand, airing 1 minute and 42 seconds of coverage on Christian churches still offering services Easter Sunday, provided that participants were aware of the potential risks.

Of the two broadcasts that barely covered the story, NBC Nightly News was the worst. Though it devoted 2 minutes in total to the fact that Christians all over the world were “finding meaning at home this year” via internet services, the broadcast gave hardly any attention to those seeking public gatherings.

The network devoted only 7 seconds to these congregations, a mere blurb. On top of that, it characterized these devoted worshippers in a scornful way. NBC correspondent Matt Bradley reported, “but today in central Louisiana and Orlando, some churches defied health officials’ warnings with in-person services.”

Even the correspondent called it the “most holy day on the Christian calendar” and commented how this “might be the first time in history that St. Peter’s Square is empty.” But Bradley depicted those trying to keep “most holy” 2000 year-old traditions as defiant.

The CBS Weekend News coverage of Christians seeking to worship was not much better. Though the network aired 1 minute and 32 second of coverage about coronavirus’ effect on Easter services, it devoted only 13 seconds to those trying to get to houses of worship on Easter Sunday.

Even then, that tiny 13 seconds was focused on smearing one local church leader as some “fire” and “brimstone” pastor who “ignored” social distancing. CBS correspondent Jonathan Vigliotti reported, “In Baton Rouge, Louisiana, fire, brimstone and defiance, as Reverend Tony Spell ignored social distancing and — keeping his church doors open — invited the public to his mega-church.”

ABC World News Tonight provided a much more balanced coverage of Christians celebrating Easter during the coronavirus pandemic. Out of the 3 minutes and 7 seconds of reporting of Easter celebrations, 1 minute and 42 seconds were devoted to covering Christians who kept churches open Easter Sunday. Though the chyron stated, “some churches defy social distancing on Easter,” the network aired footage of Emmanuel Missionary Baptist Church Pastor Jesse Horton’s comment on his order to keep his doors open.

He stated, “I am going to say to the congregation, ‘Let’s be as safe as possible. Let’s not do anything foolish.’” ABC correspondent Trevor Ault reported that there are several “lawsuits” from Christian congregations against “state and local governments” for shutting down churches. Ault even mentioned that a Mississippi church pushed back on a fine for a “drive-through service” “because liquor stores are operating drive-throughs” without legal trouble.