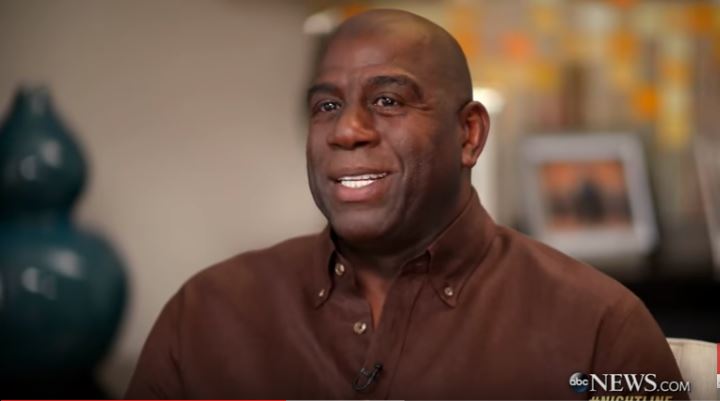 Magic Johnson’s reckless behavior as an NBA player led to an HIV diagnosis and early retirement from the L.A. Lakers. Astonishingly, in a USA Today story Friday, he compares his plight to people who, through no fault of their own, have contracted or died from the coronavirus.

In Mark Medina’s USA Today story Friday, Johnson (seen in photo) “drew parallels between HIV and COVID-19 because of the similarities regarding the misconceptions about the respective viruses, the inadequate testing, the lack of available drugs and how the pandemic has hurt the black community.”:

“African Americans are leading in terms of dying from the coronavirus and most of them in the hospital are African American. We have to do a better job as African Americans to follow social distancing, stay at home and make sure we educate our loved ones and our family members and do what we’re supposed to do to keep safe and healthy. Then when you add that up, we don’t have access to health care, quality health care. So many of us are uninsured. That also creates a problem, too. Just like it did with HIV and AIDS.”

Magic Johnson advising people on social distancing? Are you kidding? That’s the height of hubris! Magic Johnson is the last person anyone concerned about infectious diseases should listen to. He is the anti-thesis of social distancing. The blog known as Mental Floss includes him in a list of infamous womanizers, reporting he “estimates he has slept with more than 1,000 women, but has said that it was so many he lost count and had no idea which one of his trysts infected him with HIV, which he announced in 1991.”

The 2013 Oprah Winfrey interview, “Magic Johnson Opens Up About His Promiscuous Past,” is available on Youtube (below), and here’s a partial transcript.:

OPRAH WINFREY: “When you were fooling around with all those women, were you serious about any of them?

OPRAH WINFREY: “And they knew it?”

OPRAH WINFREY: “Did it ever even occur to you to use protected sex?”

MAGIC JOHNSON: “Oh no. I think at that time it wasn’t a thing that everybody even talked about –“

OPRAH WINFREY: “This was the eighties.”

MAGIC JOHNSON: “Yeah, the eighties. It was a fun time, everybody having sex, unprotected sex …

OPRAH WINFREY: “With one or more women …”

OPRAH WINFREY: “I mean one or more at the same time.”

MAGIC JOHNSON: “At the same time. Yes. … I didn’t want ’em to sleep over. I wanted ’em to leave. It was more, ya know, ‘we had fun’ and then that was it. … I never disrespected women though, and I was always up front, I wasn’t a guy who would mislead anybody.”

Despite irresponsible behavior subjecting hundreds of women to the risk of HIV, Johnson said President Bush “dropped the ball” on AIDS research. Now he’s decrying “the country’s lack of testing supplies and the varying logistical and financial hurdles it takes to receive one.”:

“We got to make sure first every American can get tested. Right now there’s a shortage of tests. People want to get tested but they can’t find a test kit. The problem is people want us to drive to suburban America to get that test. Why can’t you have that testing done right in urban America and right in the inner cities?”

This man who no one should take seriously on medical care blasted the country’s health care system. According to Medina, Johnson “observed that black people are susceptible to more underlying health conditions, including obesity, diabetes and high blood pressure. Those conditions can make people more vulnerable to contracting COVID-19.

“The lack of access to health care, that is an unbeatable combination,” Johnson said. “We need to get better. Hopefully there will be affordable health care for all people, not just for minorities but everybody. If the prices come down, then I think you’re going to see African Americans be a lot healthier.”

So says the man whose selfish, anti-social behavior in his NBA days has him taking a daily medicinal HIV cocktail.